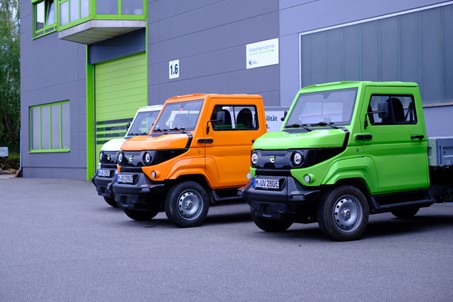 Existing investors and the European Investment Bank (EIB) invest a total of €20 million in EVUM Motors.

The existing investors of EVUM Motors are overly satisfied with the extremely successful market launch and have rewarded this with a significant increase in their investment. In addition to the contribution of new investors, the company will receive financial means amounting to €7.5 million. The European Investment Bank provides a further €12.5 million. The funds will be used for the further growth and increased internationalization of the company.

Munich, 19.09.2022 – EVUM Motors follows its vision and takes the next step towards becoming an international car manufacturer. Currently the focus lies on expanding in the existing markets and, due to the high international demand, venture into the remaining neighbouring European countries.

Thanks to its versatility and cost efficiency, the electrically powered and light commercial vehicle is high in demand among municipalities, in the agricultural and logistics/last mile sector where it is already much in use. The increased environmental awareness throughout society and the significantly increased fossil fuels prices are having a positive effect on EVUMs business development. Consequently, a large number of orders have been made during this year. The all-wheel drive aCar is being produced in Bayerbach near Ergoldsbach (Lower Bavaria) where it comes with different battery sizes and varying superstructures since the end of 2020.

Existing investors are pleased and stocking up

The investors were pleased with the business development and the performance of the founding team Sascha Koberstaedt and Dr. Martin Šoltés so far. Following their positive expectations of the course of business they increased their investment which in addition to new investors amounts to €7.5 million.

‘The European Investment Bank, the bank of the EU, is the financing institution of the European Union’. It is ‘the largest multilateral financing institution in the world and one of the largest financiers of climate action’ (source: EIB website). The EIB is known for its strict selection criteria and in-depth due diligence. Accordingly, EIB financing is primarily only accessible to stage start-ups in later stages of development. ‘The EIB’s investment of €12.5 million in the form of a venture debt is a strong indication of the company’s quality and the great future potential of EVUM Motors,’ says the experienced CFO Sami Sagur, who has also invested in EVUM Motors himself.

The significance from the entrepreneurs’ point of view

Founder and CEO Sascha Koberstaedt is very confident: “Alongside with the high demand, the new investment now gives us the possibility to increase our scale and especially to grow further internationally. With the new funding, we have the means to realize this growth and to further develop as a young, professional company.”

Dr. Martin Šoltés, founder and CEO, is excited about the new opportunities: “Firstly, we can further expand production and leverage efficiency; secondly, we can explore new products, solutions and target groups.”

EIB Vice-President Ambroise Fayolle, responsible for the EIB’s German operations, says: “It is impressive what has been created here in just five years since [EVUMs] foundation. The start-up is already generating significant sales numbers and is in the process of establishing itself as a medium-sized company. EVUM Motors is making an important contribution to the reduction of greenhouse gas emissions and to a sustainable economy.”

EVUM Motors GmbH which was founded based on a research project of the Technical University of Munich, has also located its headquarter in Munich. The production facility of the versatile, robust and compact electric utility vehicle with four-wheel drive, which was originally developed for usage in Africa, is located in Bayerbach near Ergoldsbach in Lower Bavaria. Only three years after the spin-off company was created, the aCar went into production end of 2020. After the successful sales launch in D-A-CH, the company now has a tight dealership network with over 200 locations. EVUM Motors’ ultimate goal is to establish itself as an international car manufacturer.

The European Investment Bank (EIB) is the long-term lending institution of the European Union. Its shareholders are the EU Member States. The EIB lends long-term funds for sound projects that meet EU objectives. The European Investment Bank operates in some 160 countries and is the world’s largest multilateral financier of climate projects. The EIB aims to trigger €1 trillion of investment in climate action and environmental sustainability in the decade to 2030 and to align all new lending with the goals and principles of the Paris Agreement.